Next Sunday, 4 June, Kate Tiernan and I, in our first joint venture as the Centre for Social Archaeology, will be reprising our exploration of austerity and inequality in Tower Hamlets. We previously ran it as part of the Public Archaeology 2015 cross-London politics walk back in December 2015. The walk is taking place as part of the 2017 London Festival of Architecture.

Originally developed as a reaction the 2013 report of the Tower Hamlets Fairness Commission, the walk uses contemporary archaeological field practice to see what evidence we can see in the landscape for inequality and the impacts of austerity, and how the different narratives we can build from that evidence sit within the past, present and future of the borough.

Participants will walk with us from Canary Wharf to Altab Ali Park in Whitechapel. The central task of the walk is to collect evidence for a particular sub-theme, which will be given out to participants at the start, as in the image above from the previous walk. In collecting sounds, signs, flora, smells and more, we take this archaeological investigation beyond the perhaps more typical observation of architecture and other features and replace it with an investigation of the whole built environment; the life that happens in and around the buildings of Tower Hamlets as well as the buildings themselves.

We will also be adding a couple of stops along the way for walkers to hear more about the uses of site-responsive archaeology.

At the end of the walk, participants will put the evidence they have collected to use as we put together competing ‘rich’ and ‘poor’ narratives for Tower Hamlets and question the usefulness of particular kinds of evidence in developing an understanding of Tower Hamlets that can effect change in the present and future.

We hope walkers will take away a new, deeper understanding of this part of Tower Hamlets, but also a new way of looking at the contemporary built environment that can be applied elsewhere. 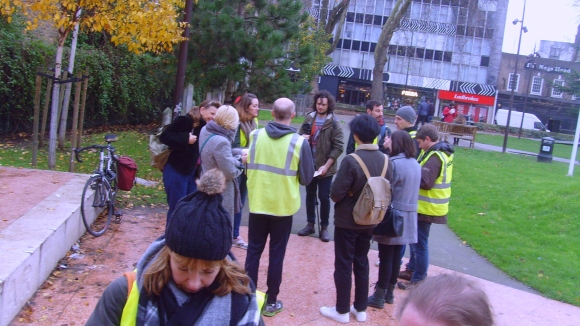 Sunday 4 June, 10am – 1pm, meet at the west exit of Canary Wharf underground station, between the Santander bikes and Reuters Plaza.

Hope to see you there!